It took me so long to finally speak about this that I’ll cut the rambling and go straight to the point: From now on, I’ll think twice before participating or giving my films to film festivals that don’t pay directors and filmmakers. And the same goes for screenings and other conferences in general.

Maybe you don’t know this, but the majority of the film festivals and screenings out there don’t pay the people actually making the content they offer on their program. They don’t pay for your talk, or your lecture, or the movie that is the headline of the program – and that will be screened to 500 people at 10pm on a Saturday – and that, in a wonderful combination of luck and opportunity, was made by YOU.

They would pay for the venue, the catering, the promotion and everything else, but hardly offer anything to the film directors. And when they do, it’s often “visibility” or “exposure”.

Of course exposure is important – it’s probably one of the most important things for an independent artist or filmmaker. It’s also the one thing that will happen for sure on a screening festival, since it’s all about showing stuff. However, exposure won’t pay my bills, or my actors caches, or the Alexa’s rental fee. It’s also a bit contradictory since normally these film festivals brag about their quality curatorship: if they know me enough to respect me and invite me to be featured, then this means that I already have some relevant exposure. The only reason why my name is there is because I do my work well enough to be selected in the first place. In order words, I am there because I deserved to be there.

At the same time, festivals charge for tickets. If people want to go, they actually need to pay for it. But are they paying to sit in that chair or simply enter that event? Nope. They pay because they want to hear what the speakers are saying, or watch the films that we made. They pay for the content – and content makers are the only ones leaving the room with 0 money.

Them and the people volunteering in the backstage, who also don’t get paid for their work and make sure to tell everyone else as a paradoxical passive justification. “I’m sorry we can’t pay you. We don’t get paid as well”. I’m sorry to say, but every time someone is putting working for free, someone else is making doubling their profit.

I hope that by now you’re not seeing me as a skinflint. My intentions aren’t to make money out of festivals – I know how cultural organizations struggle to remain on their feet and how unfair that world can be, too. But that’s not what this is about. The last pay I got from a Festival was as low as 50 euros, and it included the screening of the director’s cut of Call Me a Ghost. And I was very happy about it. Is that gonna bring me closer to a wealthy retirement? No. But it’s something. It’s a symbolic – and still, monetary – gratification for using my work on their project.

I don’t believe there is such thing as a “no payment policy”. There’s just a weird modus operandi in this world, on which organizers would try to get people saying yes for as little as possible, so that they can profit on their talent.

It also doesn’t always have to be money. Festivals are wonderful because you get face to face with your audience and see their reactions to your films in real time. Plus, they are the perfect excuse for taking a trip to a city you never thought of going (I like big trips and I cannot lie). If organizers don’t have the budget but are willing to help me get there, sleep there, or eat there, I am up for it, too!

Again, is not about pettiness, it’s about being fair and valuing my own work. I know, this can backfire at me and I can grow up to find that all other directors are accepting lame offers just for the fate of being there, and I’m suddenly out of the equation.

I can only hope not, and continue raising a flag for all independent artists and filmmakers who struggle to make a living outside  the mainstream industry to take a look at their work and put a price for their presence. Because even if they don’t, the organizers will – only that in that case we don’t see not even a penny.

Main picture, the audience at Cinema nova, during a screening of a film at Pink Screens film festival 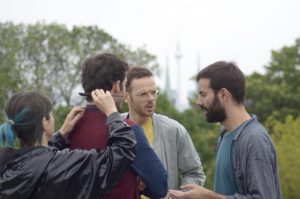 Noel and the crew during a shooting

Be the first to review “Why I think twice before saying yes to screen my films at a film festival” Cancel reply
By continuing to browse this site you confirm that you are aged 18+. We also use our own and third-party cookies to offer you a better service. If that's okay with you, just click "Accept all." You can also choose what type of cookies you want by clicking on "Settings". For more information you can consult our Cookies policy
SettingsRejectAccept All
Manage consent