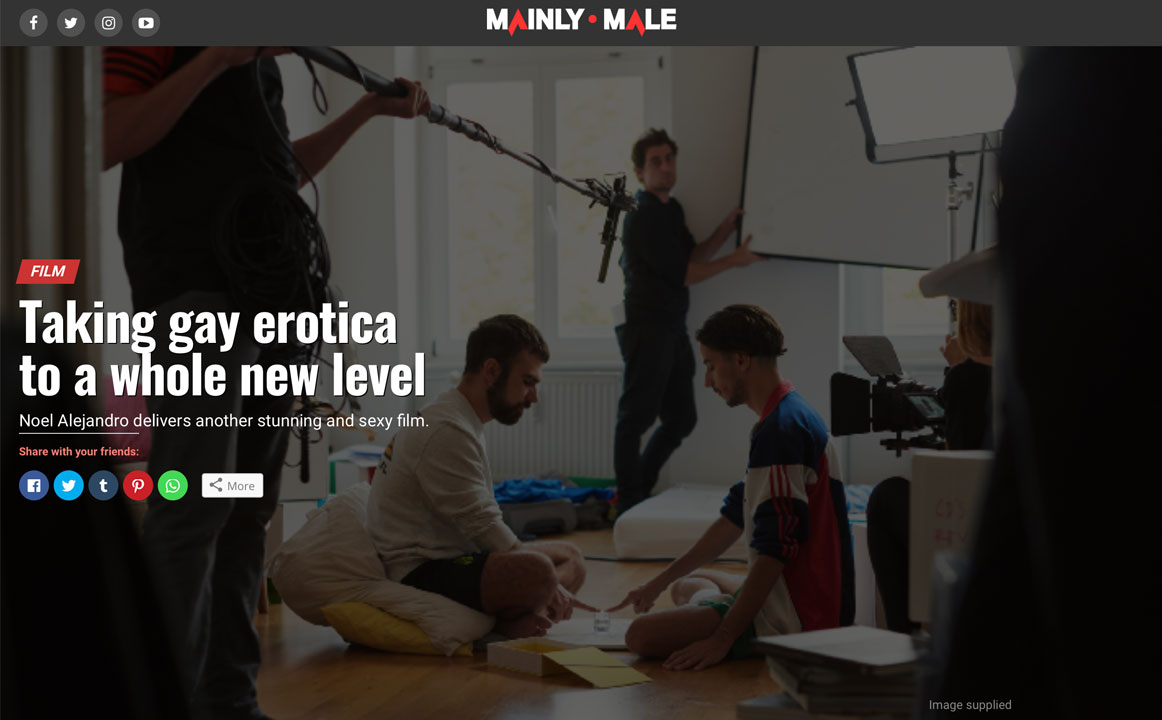 The latest film from Noel Alejandro is Serodiscordantes.

Serodiscordantes explores the relationship of Evaristo (Cachorro Lozano) and Miguel (Alejandría Quince), focusing in on the moment that Miguel reveals his HIV status to Evaristo.

Once again, Alejandro has delivered a killer combination of great acting, great storytelling, and great sex. You’re going to want to watch Serodiscordantes.

Ahead of the release of Serodiscordantes, I caught up with Alejandro for a behind-the-scenes look at the film.

What was your inspiration for this story?

Alejandría contacted me at the beginning of 2018 to tell me their story. He and Cachorro are partners in real life, as well as co-stars in this film. Alejandria and Cachorro had been through an uncertain year together of silence and secrets regarding Alejandria’s HIV status.

From the very beginning, this felt like a good story to tell, an emotional story to tell. The esoteric elements of the story – such as the pendulum consultation and the Ouija board – emerged during the development of the story.

I see it like two children playing a game for fun, and then a truth is revealed – resulting in a loss of innocence, forcing them to grow up instantly.

The Ouija is the tool that they use to let their internal voices speak. It shows the incredible strength of the subconscious – which screams inside us to get out – but we keep it inside us like a demon.

Have you ever used a Ouija board?

In Spain, we have a strong tradition with esoterics and afterlife stories. I was around 20 years old when I had my first afterlife experience – it was with my cousin.

We used a coin as the marker, and the coin started to move without me or my cousin moving it. It gave us coherent answers to the questions we asked. All of a sudden, all of the stories that I’d heard about this kind of thing finally made sense.

That experience helped me to understand how human perception and subconscious works.

What was your casting process for this film?

My casting process is often just when the right person contacts me at the right moment. When Alejandria told me his story, he and Cachorro also offered to appear in the film.

What was your location for the shoot?

It is an altbau – an old building with a high ceiling – next to a busy avenue in Berlin. It wasn’t difficult to find – the owner seemed to like my work.We mixed natural and daylight for this filming – we filmed in two days.

Does a film like this help to tackle the stigma that still impacts people living with HIV?

It shows a real situation that people with HIV have to face daily – to come out of the closet, again.

Portraying these kinds of situations is a way of highlighting the topic, and tackling ignorance and shame.

What do you hope that people feel when they watch Serodiscordantes?

I’m really not sure. Everybody will see the film and understand the story with different readings, depending on their personal life experiences. I simply hope that people like it so that they can keep connected to my films.