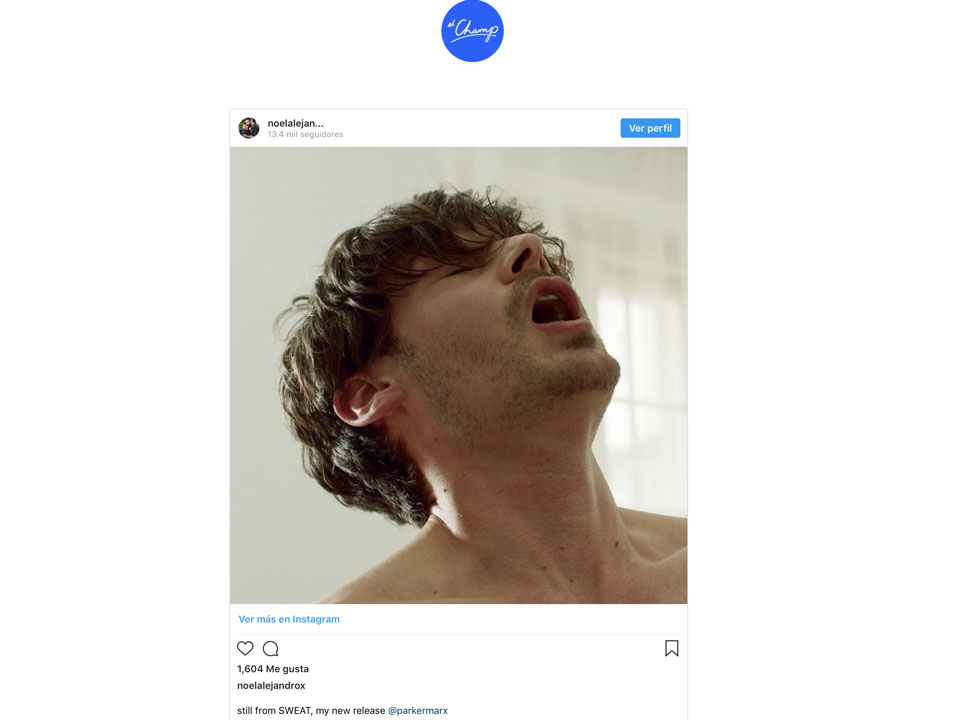 Three queer films that had a formative impact on your youth?

If by queer we mean with political connotations I’d say “I Want Your Love” by Travis Matthews, “Una Mala Educación” by Pedro Almodovar and “Girl” by Lukas Dhont. I would also include in this little list, “Mulholland Drive” for how the women own their sexuality.

Growing up, was sex considered a taboo subject or was your family open to discussing sex? How did they react to your career choice and have they seen your films?

I have to admit that sex has never been an open topic in my family. I’m particularly shy when it comes to being open about sex in a family environment and it took me many years to talk openly about my sexuality. I’m a victim of a heteronormative society and whilst I grew up in Barcelona which has always been one of the most progressive and open minded cities in Spain, heteornormativty affected me having any sex centered conversations. I’m maybe too sensitive when it comes to human connections and relationships so this too comes to mind and makes me wonder why…

I don’t delete my history since I don’t share my computer (lol), but yes, when it comes to privacy I’m very protective. I really believe that an anti-shame movement of not deleting porn would push people to ask why are we still so ashamed and it would help us understand how natural and spontaneous desire is. I’m sure most of the conservative parties prefer to fight against sexual liberalism because it’s easier than facing their own fantasies and conflicts with themselves. No nipples in an Apple store? They must believe “let’s just pretend that they don’t exist so we don’t have to deal with our inner sexual beings and all the trauma around”.

Pornography still has a lot to offer and directors like Erika Lust, Antonio Da Silva or Travis Matthews have a lot to contribute.

The best piece of advice from feminist pornographer, Erika Lust, that you apply to your life?

I know Erika personally and closely, beyond the image that she projects in media and I can say that she is even more interesting in person. It’s not a secret that most of what I’ve learnt is from our time together. She is the one that encouraged me to love what I do and not to abandon hard work. In addition the feminist way of thinking that I’ve also developed during my four years with Erika Lust and Pablo Dobner.

It is the best part of being a filmmaker in my opinion to play with the images, sounds and different music. It is incredible how much you can distort the audience’s perception with editing and the song choice.

Classical music in my films is just a spontaneous and intuitive choice. I adore the malice of mixing wild human emotions with delicate piano concerts and classical music, it makes us see everything with perspective, it pushes us to think about the reason for our behavior in society and to understand ourselves.  I guess that is the purpose of my job as a film director – to help people try to understand and be more intune with who they are.

I simply select my casting (as much as I can) following their look rather their bodies or “attractiveness”. If their look is captivating and they believe in the role, that’s a huge plus. It is very difficult to write a role for somebody who evokes a joie de vivre, I’m more up for tortured souls.

A narrative or melange of emotions that you haven’t addressed yet in your filmography that you’re excited to explore?

The call of the spiritual life and the abandoning of the strictly scientist oriented way of reasoning. The fringe of being born outcasted, misunderstood and different types of relationships. Imaginary friends and the juxtaposition of alternative and parallel life dimensions. Again, forbidden love, loneliness, aliens, psychopaths and unthinkable crimes that I can’t even believe how much I need to film.

Filming two men having sex is political. Some people write me to tell me that my films have helped them to leave behind self-destructive thoughts that sex between men is not okay.

Who would be your pipe dream to recieve a nude selfie from?

What would you graffiti on the back of a toilet door?

I guess I would draw a penis, I’m very classical.

based in Berlin and Barcelona