"Down a dark path with Noel Alejandro" 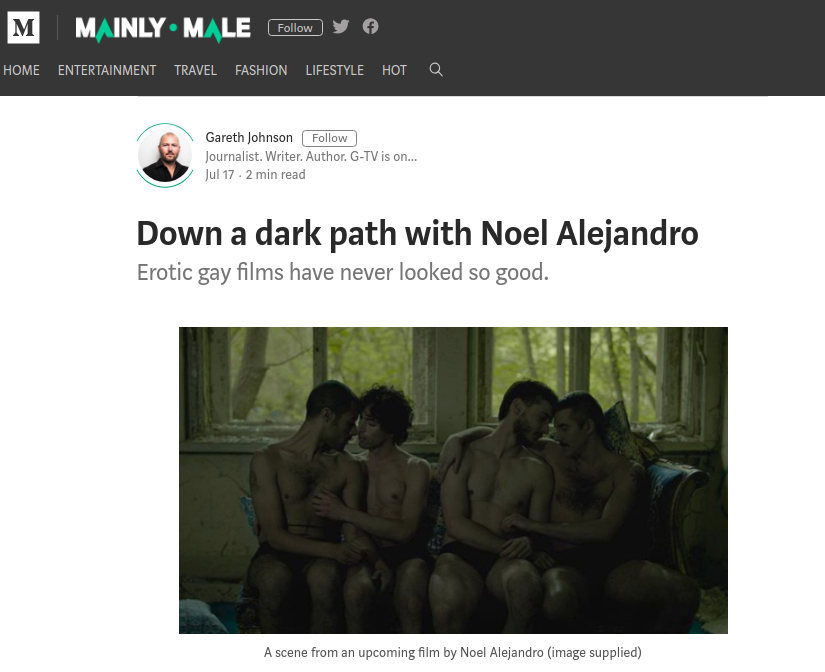 Down a dark path with Noel Alejandro

If you’re looking for grown-up gay erotica, it doesn’t get any better than the stylishly sexy work of filmmaker Noel Alejandro.

I caught up with him to talk about his current projects.

You’ve begun teasing us with images from your next release, what we can look forward to?

Right now, I’m working on two short films. One of them is a story in poetic key that I’ve already filmed and I’ll release at the end of October. The other one, which I’ve only just shot, will be released first?—?it’s a more linear and dry story.

I don’t have official titles for either of the two, although I am shuffling some ideas.

It looks like you’ve been filming in a forest or some sort of abandoned house?

It’s summer and we wanted to film something out of the classic house where everything happens under a roof. You also have to take advantage of this time of year in Berlin?—?in two months it will be very difficult to record exteriors due to the weather and the few hours of sunshine.

Who have you cast in these films?

In both shorts I repeat again with Valentin Braun and Yann André, both appear in Trivial. The rest of the actors are new faces in the world of adult cinema. I usually work with a lot of beginners?—?somehow they get in touch with me because they’re interested in participating in a more artistic project.

In one image you’ve released, you’re showing four guys together. Is this the first four-gy that you’ve filmed?

One of the films is tackling issues around drugs and addiction? Do you think your audience will be surprised with the way that you’re tackling this subject?

I think movies should raise problems, questions. Talk about taboos and never limit yourself to anything. A film, for me, is a journey within the psychology and malice of the director. The director has created a work based on a concept that they been growing, modifying, and producing during all the production processes of filming and editing.

What do you hope that audiences will feel when watching this film?

I’d like them to feel worried about how vulnerable we can be.