"Ingenious Filmmaker Noel Alejandro Is Back With Another Masterpiece “Under The Rain”!" 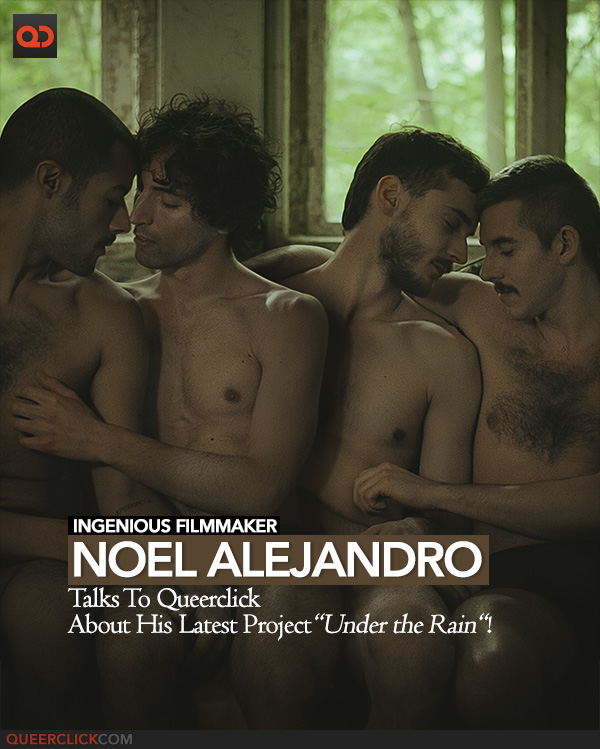 Noel Alejandro‘s new film is “Under the Rain” takes you to a surrealist journey of intimate visuals and hauntingly beautiful aesthetics. Sex on films have never been shot this alluring. The filmmaker himself talked to us about this thought-provoking erotica. See more after the jump!

As a film director who never holds back into mixing high-art and queer coitus in scenes, Noel Alejandro has been an expert on perfecting this formula. His new film “Under the Rain” is no exception. With handsome casts and great acting, it surely is a stimulating piece that would get you moved from start ’till the end.

The film’s unconventional story-telling is its strength. But it only gets better with the help of its versatile actors who can deliver the emotions flawlessly they will leave you breathless. Backed with soundtrack reminiscent to Bobby Krlic‘s sunny score for Midsommar, the whole film is an artistic experience.

We talked to the innovative director Noel Alejandro to discuss a bit about the movie, the actors in this film who he worked with for the first time, the movie’s undeniably unique set, and more. Read some of his insights so you could get a taste of what to expect from this homoerotic masterpiece.

QC: How do you feel that this film is going to be screened at QueerPornScreening on November 29? Are you going to be in attendance to introduce “Under the Rain”?

NA: QueerPornScreening is curated by my dear friend Pierre Emö. If you are familiar with my work you might know him. So I’m very happy to be in it premiering the film together with other Queer directors. I’ll be there and we will hold a Q&A to answer any question. I’m actually quite nervous.

NA: Both and Enki Babylon got their first time working with me. They did an awesome job. They had to get into a character without having so much acting experience. We had rehearsals the previous days and we end up extremely tired after all the hard work. The shooting was also a extremely challenging but they end up delivering a good performance, magical in some cases. You can get a wonderful dramatic performance if you work enough before with the actor. On rehearsals I’d say is when you really make the movie.

QC: How is this different from the previous films you made previously? Was there a theme here that you haven’t touched before?

NA: This film is a non lineal story that mixes two different realities according with the plot. This film talks about an artist who has lost himself during the process of self creation. The artist irrupted together with other 3 men an abandoned building to execute a photo artistic shooting but within the story we can see what is really the true intention of the project and why the actions taken by the performers show something different. The stigma that we, the sex workers (I include myself due the nature of my work) we live everyday, the social pressure and the need of keeping our self-esteem up marks our life, and this film talks in a poetic way about this fight.

QC: How did this film resonate your personal life when you said that it was inspired by it?

NA: Every story I work in talks openly or metaphorically about me and my fears, or about those things I cant understand but I truly need to. In this case, Under the Rain is a poetic transcription of the different faces of most artists I know, the will to succeed, the innocent and sparkling willing of the illusion, the feeling of defeat and finally (and most important) the self-indulgence. The four characters could be the four different faces of the same person.

QC: The direction of photography looks hauntingly beautiful. Were there films that inspired you to take this aesthetic direction?

NA: In this film we work mostly with natural light, we also want to achieve a more psychological approach to the actors so we designed this extreme-close ups in the shadow in order to feel more close to them. The rest of the aesthetic directions is a mixture of a constant work in postproduction in order to achieve the best atmosphere possible and a mix of circumstances. The combination of the ruined building and the 16 Waltzes by Johannes Brahms or the Victorian couch in the middle of the sex scene determines that the beauty still exists in the most uncertain circumstances, when we feel lost. The music, the images, the plot and all elements should take the audience to a certain state of mind.

NA: Sex and pornography belongs for most of us to our privacy. This is the way many people choose. But in my case, when I’m bringing narrative to an adult film and then this films gets out of the adult circuits this evoques many questions. For example, what is the limit of conventional cinema. Or why couldn’t I watch a sex film together with my friends in a cinema room but I can totally do it with a partner? I’d say each of us marks the limits, each of us has a vision of where this cinema belongs. If I watch a sex film with my friends or if I watch it with a partner, am I going to feel the same? Will I allow myself to feel the same? Probably not. The gay porn industry, or the adult industry itself will probably stay in the alternative circuits forever.

QC: Looks like the set for “Under the Rain” is pretty challenging. Were there some difficulties you faced during shooting?

NA: We had to move due some technical reasons to a second location at the end of the first day of shooting and yes, it was quite challenging. I think this shooting made me stronger than I can never imagine. Today I can feel all the pain we went through was totally worth it. We all learnt a lot. I’m quite used to film at safe and comfortable apartments, you have a bathroom, a kitchen… its definitely safer. But this time we wanted to get out of the comfort area.

The film is a must-see. It’s out now! You can watch the trailer below. The explicit version of the trailer and the full film are available on noelalejandrofilms.com

We use our own and third-party cookies to offer you a better service. If that's okay with you, just click "Accept all." You can also choose what type of cookies you want by clicking on "Settings". For more information you can consult our Cookies policy
SettingsRejectAccept All
Manage consent