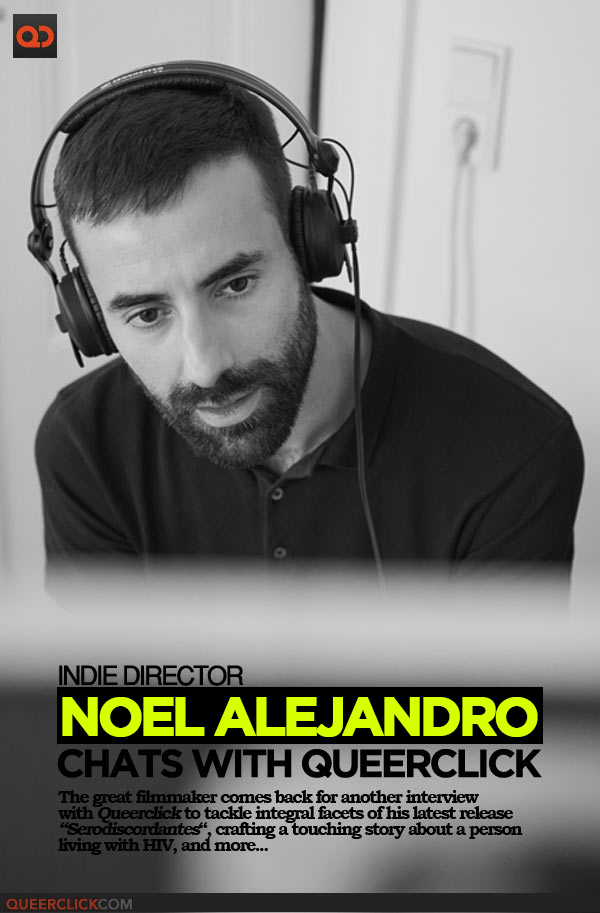 The Berlin-based filmmaker talks with Queerclick regarding some significant key points concerning his bold move to make a film about intimacy between an HIV+ man and his partner in this very intricate visual narrative.

Noel Alejandro‘s mind is undeniably prolific when it comes to creating his own take on transforming big-time sensuality into screen gems. A more depth visualization which is a contrast to mainstream gay pornography is how this young artist effortlessly steps the game up. Films are created to make us feel something. The amusing fragments of Noel’s philosophy on filmmaking are clearly embedded on his works. His films, though concludingly built and culminated from sexual foundations, make us feel something but in a more profound way. It’s an effective story-telling device that perfectly captures the sexual tension between characters.

The great director of the film Noel Alejandro came back for another interview with Queerclick so we could find out some integral facets of his latest release. You can read our other interview with him here to know more about his other works. Make a jump to read the full interview. Coming in fresh from the oven, Noel Alejandro‘s latest art piece entitled Serodiscordant is a careful mix of Lars von Trier‘s peculiar filmmaking approach and Luca Guadagnino‘s stylistically dramatic and ambient directions. The film focuses on a relationship between Miguel, who is a person living with HIV, and his partner Evaristo. The characters are played by Alejandria Quinceand Cachorro Lozano respectively who, by the way, are partners in real life. The film is based on the true life of the performers told by Quince which showcases the couple’s intimate moments together as they take a long and carnal journey to ecstasy being in a serodiscordant relationship.

How long did it take for you to make this film from conceptualizing to post-production?

Well, it actually took no much time I’d say. Alejandría sent me an email telling me his story and how much he would like it to become a film. I think he told me this on May 2018, so in summer, after the shooting of The Seed, I started to work on a script, once finished we agreed we needed some more magic on the film in order to make it special and we started over. So then by the end of September, we were ready to film in October. I really paid a lot of attention to the editing, this is the way it took around 3 months to be finished cause I edit, re-edit everything and then I was always subtracting and adding parts, experimenting with different kinds of music, playing everything again without… We could say it took 6 months to finish it all.

So according to your press release, this film was not originally in your movies scope. Have there been any challenges you faced when it comes to conceptualizing the idea or how you are going to make the idea materialize?

Originally I ask Alejandría to join in a different film (that was actually shot last summer and will be released the next months) and then he told me that he’d like to perform better in a different kind of project, together with his partner Cachorro Lozano, who would share a very special story together that deserved all my attention from the beginning, so easily that would be the project we film right after the current shootings. There’s always many challenges when it comes narrating itself, let’s not forget I’m actually taking this project (Noel Alejandro films) as my particular school cinema, so when it comes about improving and learning, filmmaking/narrating every film is a new challenge.

How did Alejandria Quince feet after filming the movie when we understand that the role is close to his heart?

He was exhausted! I can remember him telling me privately that he’d rather take it easy on filming. In the end, we required him to stay for hours in the same position, repeating takes, he had to be very patient with us since we really needed him to not to move out of the frame as we were taking many detailed close-ups from his face and hands. But he was very connected to the project all the time so I haven’t felt at all that he might have felt overwhelmed for how personal the story was.

What made you decide to push for Alejandria’s idea and make this art piece?

I’m very into dramatic and psychological stories about people who have to deal with emotional anguish, whoever knows my work a bit might see the I’m sort of focused on prior the psychological profile of the characters, and this story was very touching to me from the very beginning, since we are talking about denying a part of our identity to those we love, something that many queer people has to deal with a lot. How has it been working with a real-life couple? Can you tell us about their chemistry on camera compared when the cameras are not rolling?

I’ve always preferred working with real couples since their chemistry is so much better and there’s no risk of lack of connection, which would be very disappointing for the performers itself and also for the final film. When they were performing Miguel and Eva they were way more contained than when we weren’t filming or rehearsing. They are very funny and they showed a sort of connection to each other that sometimes was very difficult to follow them. That’s part of the beauty in couples, they develop a language that they can only understand themselves.

That scene where Miguel comes clean to Eva was powerful. How did that clever reveal come about?

Originally, Eva would have to find Miguel’s medication and that would have been boosted into a big fight. But then I was not sure I wanted that kind of energy on the film so we decided that the truth would come up accidentally and that none of them deserved actually to be judged or to enter in a fight. How important is it for you to make an intimate film featuring a story of a person living with HIV and can you comment on the lack of mainstream films tackling this particular issue?

It is certainly a topic that worries most of the people in the queer community, I could not just ignore it even when we are talking in the end about a sex movie.

This was the main point of the film. Serodiscordant couples can have non-condom sex if the undetectable HIV carrier keeps undetectable, taking the medicines, then there’s no risk at all. The virus can’t be transmitted.

Are there any other controversial or taboo subjects you wanna touch on for your next projects and why?

Next movie I will release talks about the stigma of pornography we have with ourselves who are dedicated to this genre. Later on, I’ll be working together with Pierre Emö about a man with some serious daddy issues. This is the most interesting part of writing and directing, you can talk about those things that make you have goosebumps or you find they haven’t been enough developed yet or spoken, otherwise, where’s the fun?

Watch the trailer for Noel Alejandro’s film Serodiscordantes below or go directly to NoelAlejandroFilms.com to watch the movie.