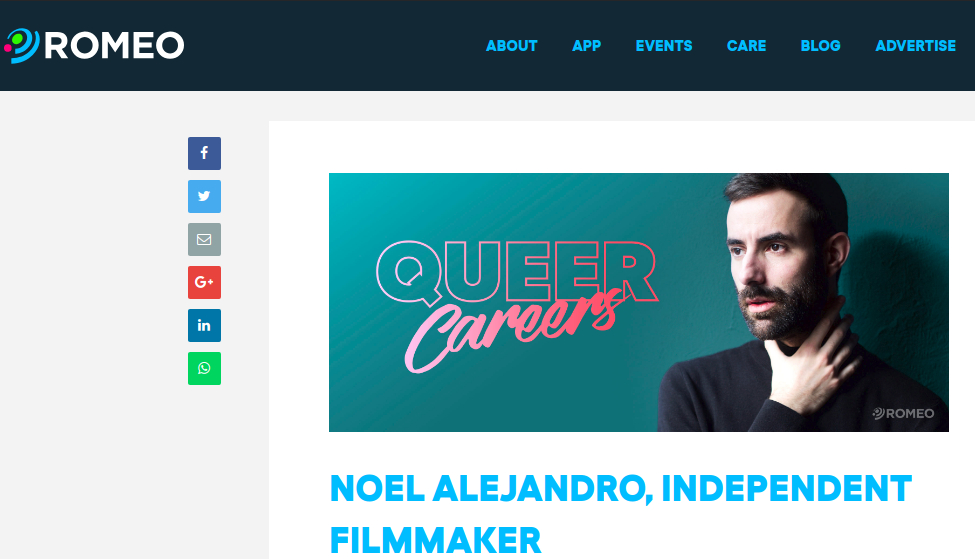 Hey Noel, please introduce yourself to our ROMEO audience. Who is your target audience?

“Everyone hungry for a different genre.”

Do you develop ideas with scriptwriters or is it improvised scenes?

“I just added a screenwriter to the team. Previously, I was writing it myself. We have improvised a lot in some scenes, which have been very good at times. Call Me a Ghost is completely improvised and was practically written in production. Improvisation can be a great technique to learn how to make movies.” Do you screen your performers’ sexual health status?

What is your position on PrEP and working with HIV positive actors?

“My actors have sex according to their preferences. They are tested regularly, and we try to make them feel as comfortable as possible in the sex scene. I always bring condoms to the shoots, in case the actors change their mind at the last minute.”

In your work, the Adonis body type is prevalent, do you plan to work with more diverse shapes and sizes?

“I have not only worked with Adonis types, there are very different bodies to be found in my work. If you only see a particular body type, it is unintentional. I do not have as many proposals as you may think.”

“I make a living from my work and distribute my own cinema, by myself. What makes me feel the most satisfied is that I’m getting over old insecurities, while growing up as a film director. I’m learning how to lead a team, and that’s something I never thought I would be able to do.” Greatest mistake so far, if any?

“Losing myself in fear, and wasting many chances to face the problems.”

What’s your dream project and what are you working on next? Any advice for people hoping to get started in filmmaking?

“Yes, learn some basics from somebody else first and start to fly asap. You will learn fast on the go. ;)”